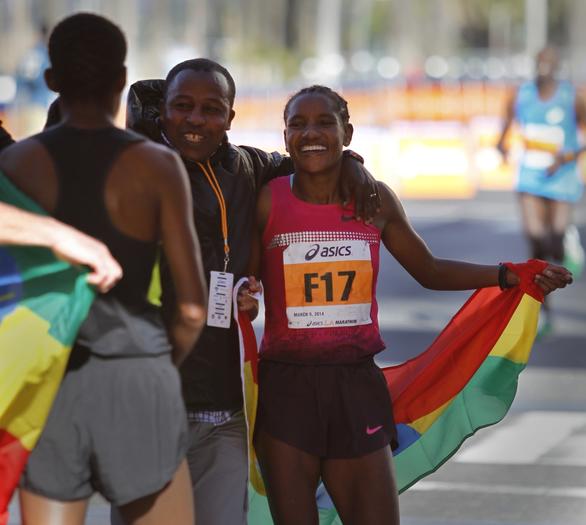 Amane Gobena glanced over her shoulder several times as she approached the final stretch of Sunday's L.A. Marathon.

Gobena, of Ethiopia, wanted to make sure that no one could threaten her shot at a $75,000 payday.
She had no need to worry.

Gobena won the women's race in 2 hours 27 minutes 37 seconds to earn $25,000.
Countryman Gebo Burka won the men's race in 2:10:37, but his time was not fast enough to overcome the 17-minute 41-second head start afforded the women as part of the event's $50,000 gender challenge.
Gobena crossed the finish line 41 seconds ahead of Burka to collect the bonus.
"I'm building a house," Gobena said through an interpreter, "and definitely that house will be paid off."
It was the second time in the 29-year history of the L.A. Marathon that Ethiopians swept the men's and women's races. In 2011, Markos Geneti won the men's race, Buzunesh Deba the women's.
Burka earned $25,000 and dedicated his first marathon victory to his recently born son.
Joshua George won the men's wheelchair race in 1:33:11. Susannah Scaroni won the women's race in 1:54:54. Each earned $2,500.
More than 25,000 participants took part in the 29th annual marathon, which followed a course from Dodger Stadium to Santa Monica.
Temperatures were in the high 50s when the elite runners started and in the 70s when they finished.
Shortly after the wheelchair athletes left the starting line, 10 elite women followed, with Gobena running among a pack that included four other Ethiopian runners and American Lauren Kleppin.
Gobena, 31, finished second in the 2009 L.A. Marathon. She placed sixth in the Dubai Marathon in January and said this week that she was determined to win not only the L.A. Marathon women's race but also the challenge bonus.