Robin Van Persie © Action Images
Arsenal manager Arsene Wenger said on Tuesday he'd all but given up on the idea of Dutch striker Robin van Persie playing for the English Premier League club again this season.


However, he stressed the player would regain full fitness and once more be a force at top-flight level.

The 26-year-old forward suffered a right ankle injury while on international duty in November.

The Gunners had hoped the striker might be out for six weeks but instead he needed surgery and now Wenger believes the best van Persie and Arsenal can hope for is a return towards the end of the current campaign.

"If you are very positive you would say (he'll be back in) April," Wenger told the club's website. "If you're a bit cautious you say May. It is virtually the rest of the season.

"Personally I thought 'Let's put it in my head that he will not play again this season and hope that I will have a good surprise'," the Frenchman added.

However, Wenger is confident van Persie will bounce back from the injury and rediscover his top form next season.

"When you have such a big surgery there is one thing that is important first of all, and that is the option of the surgeon, will he be the player he was before? We had a clear answer. 'Yes'," Wenger said.

"The second thing that is very important in the first stage after surgery is has he an infection or not? He hasn't.

"The third thing is patience. At the moment he cannot do anything, he is just sitting at home waiting until he can work again. The first two steps have been very successful."

Van Persie's injury has led to speculation that Wenger will move for another forward when the transfer window re-opens next month.

Arsenal are third in the Premier League table and through to the knockout stages of the Champions League.

Wenger said he would have no concern in signing a player in January who was cup-tied for the Champions League, just as he did when bringing influential Russia forward Andrey Arshavin to north London at the same stage last season.

"Yes, I would," Wenger said when asked. "We are going for the domestic title and the FA Cup as well and doing that allows you to rest a player for the Champions League or play another player in the Premier League.

"Of course I would prefer the player who can play in both competitions and so it would mean the player has the quality to play in the long-term for Arsenal Football Club.

"But we have an interested eye on the transfer window and if the right player turns up then we will do it.

"Sometimes you think that is a bargain you cannot turn down and don't forget Arshavin got us into the Champions League last season." 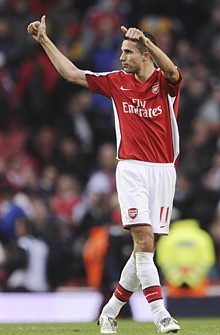 Nigeria were among the very few countries which failed to turn in their votes for this year's Fifa World Player of the Year Awards.

All member associations that make up Fifa are sent nomination forms for the national team coaches and captains of their men's and women's teams to vote for their top three players.

For Nigeria, super Eagles coach Shuaibu Amodu and his skipper Nwankwo Kanu along with their Super Falcons counterparts were expected to join the rest of the world in voting for the Player of the Year.

"I am not sure what happened," NFF Chief Media Officer Ademola Olajire said when contacted. "I will find out and get back to you."
Top

Re: Wenger willing to wait on Van Persie 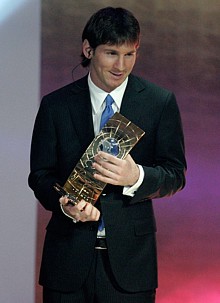