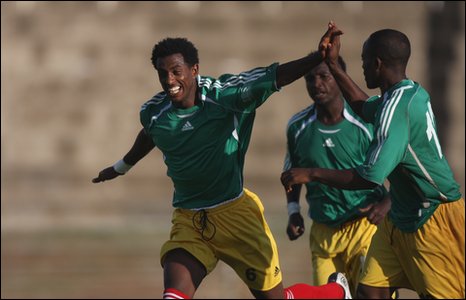 Ethiopia have moved to the top of their group at the Cecafa Senior Challenge Cup after 5-0 win over Djibouti in Nairobi on Monday.

The two teams were locked at 0-0 at half-time, but the Ethiopians unleashed their strikers in the second period.

The match was the opening game for both teams in the group stages of the regional tournament for East and Central Africa.

Aklilu Ayenew opened the scoring five minutes into the second half.

Ethiopia then stretched their lead when Adane Girma followed up with the second 10 minutes later.

Then Tefesse Tesfaye made it 3-0 before a brace from Umed Ukuri sealed the win.


Djibouti ended the game with 10 men after Daheri Hassan Ali was sent off with five minutes remaining.

Ethiopia go to the top of Group A on goal difference ahead of Zambia, who beat the hosts Kenya 2-0 at the weekend.

Coach Abrahem Haimanot said he was delighted with the win.

"We have trained for only a week as the Ethiopian league has just started and that is why we had a slow start to the match," he said.

His opposite number, Ahmed Gosheri, acknowledged that Djibouti need to improve rapidly.

"We have to play and register better results against Kenya and Zambia otherwise going home early is inevitable," he said.

The action at the Cecafa Senior Challenge continues on Tuesday when Eritrea take on Zimbabwe in Group B whilst Zanzibar take on Tanzania in Group C.