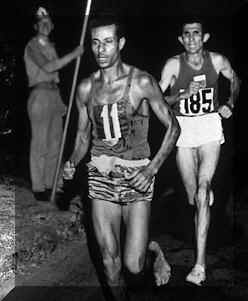 (ANSA) - Rome, March 10 - Rome is to name a street after Abebe Bikila, the Ethiopian runner

who won the Rome marathon barefoot in 1960.
"We're still looking for the most appropriate place to commemorate Bikila's legendary feat,"

said Rome Culture and Sport Commission President Federico Mollicone.
Mollicone said the street would be named by the end of the year, the 50th anniversary of the

groundbreaking run when Bikila became the first Black African to win an Olympic marathon.
Bikila amazed viewers worldwide with his barefoot exploit on the 1960 circuit, much of it on
Rome's notoriously bumpy 'sanpietrini' cobblestones.
His win in what was the world's first
widely televised Games was followed four years later in Tokyo, where he used shoes.
Bikila died of a brain haemorrhage in 1973 at the age of 41, a consequence of a bad
road smash five years earlier.

Yahoo must Fashion Channel launched this winter with warm clothing, a pair of Christian Louboutin, or a pair of EMU Boots, Moncler Jackets on a put or a The North Face, plus additional security at the end of a Chanel's plastic Leggings, put LV mink shawl. Winter is definitely the brightest. We are professional Christian Louboutin Sale online store, before Christmas, all products will be 5 discount sales, you are welcome to visit.
christian louboutin shoes
Top
Post Reply
2 posts • Page 1 of 1