[left](CNN) -- Life had not quite worked out the way Fuad Ibrahim had planned.[/left]
[left]A few years ago the whole world was laid out at the 21-year-old American striker's feet. Ibee, as he is known by his coaches and teammates, was considered one of the most naturally talented players ever to emerge in U.S. soccer.[/left]
[left]He was quickly brought into the national team set up, playing in every game at the Under-17 World Cup finals. At the age of 16 he was the second youngest player ever to be drafted into the MLS. Perhaps prophetically, the youngest was Freddy Adu, a name that has become a euphemism for talent unfulfilled.

Luck, nerve, injury, temperament: no one could explain Ibee's decline after being called up to the U.S. Under-20 squad. But decline he did as he went from Dallas to Toronto and then to his hometown club, the Minnesota Stars in the NASL -- the second tier of U.S. soccer. The decline appeared terminal when he was released at the end of last season..[/left]
[left]And then out of the blue an email arrived from the country of his birth -- Ethiopia.[/left]
[left]"It said that Ethiopia would like to invite me to play for the national team," Ibee told CNN, speaking from his hotel room in the capital Addis Ababa. 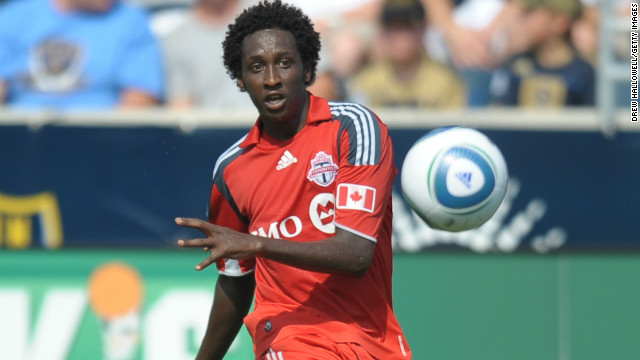 Like Ethiopian Team on FB
[/left]
[left]Africa calling[/left]
[left]Ibee had left Ethiopia with his parents when he was eight. He only remembers blurry snippets from his life there, while he does not speak much of the language, just a few words and phrases.[/left]
[left]He still does not know quite what to make of how things have turned out. His entire life had been geared towards one day playing for the full U.S. men's national team. Now there was another potential future on the Horn of Africa.[/left]
[left]"I didn't think they wanted me to go right away but then they kept emailing me," added Ibee.[/left]
[left]"Eventually I replied back, thinking it might be something for the future. A couple of times we had contact over the phone. Then I realized they were serious."[/left]
[left]Soon Ibee was flying to the high altitude of Addis Ababa and into Ethiopia's squad for the 2013 Africa Cup of Nations, a biennial tournament considered one of the toughest, and most entertaining in world soccer.
Ethiopia had once been champions of Africa. But a devastating series of famines and wars killed millions of people in the 1970s and 80s. Soccer took a back seat until last year when the Walya Antelopes came from nowhere to qualify for their first Africa Cup of Nations in 31 years.[/left][left]Coach Sewnet Bishaw has masterminded their shock qualification -- Ethiopia having somehow made it through after losing 5-3 against Sudan in their first match.[/left]
[left]But Bishaw knew that, in a continent that provides some of the best players to the best clubs in the world -- with top African players playing for the likes of Real Madrid, Chelsea and Barcelona -- experience in foreign leagues would be needed.[/left]
[left]Eventually that trawl led to the MLS and to Ibee, who was handed his first start in a warm-up match against Tanzania. He scored.[/left]
[left]"It was a special moment to score," Ibee said of his first-half strike in a 2-1 victory. "It will live with me for the rest of my life."

Like Ethiopian Team on FB
[/left]
[left]A Minnesota winter[/left]
[left]After emigrating to the U.S. the Ibrahim family settled in the wintry climes of Minnesota. His father made a living at a driving school, while Ibee soon discovered that he had a talent at soccer.[/left]
[left]"It was the United States, the land of opportunity, so it was a chance to be raised in a better environment to have that opportunity in life," he said of the family's reasons for emigrating.[/left]
[left]"But for any kid growing up in Africa, soccer is the first sport they play. I was never really serious but I started playing club teams, I was doing good and realized I should stick with it ... everything for me then was all about playing for the States."