Book signing: GPS for America: Toward “Building a More Perfe

Book signing: GPS for America: Toward “Building a More Perfe

at Unification Church of Washington DC

“The American Union is imperfect. But it is certainly motioning towards a perfect union.” It is this foundational thesis in the fulfillment of the American vision that this book focuses on. By affording an integrated and holistic approach, the book shows that the American dynamics is transformational living phenomenon framed on four major paradigms: that America is a land of freedom; that America is a land of opportunity; that America is impregnated with inertia within it that propels it to “repair its faults”; and that the nation has been moving to a higher ground in its motion with a concerted effort of its people as one (E pluribus Unum) to build a more perfect Union. A pragmatic but positive outlook on the American reality in the bountiful land by a first generation immigrant from Gojjam, Ethiopia, the author tries to help the reader develop a generic framework in understanding the evolving American reality since the founders took the bold step in 1776 to write an audacious proposal that “all men are created equal,” endowed by the creator with “inalienable rights.” The analysis in the book begins by framing the constitutional bases of the nation as a four dimensional compass. Using what he terms as the American GPS, he leads the reader to have a snapshot on the structure of American government, citizenship, church and state, legal, economic, political and foreign policy issues to show that in fact what is manifesting in the American socio-political topology is not a random act but an in-built, systemic transfiguration in creating the opportunity for all children of Adam to realize their God given inalienable rights, being Geezans (freely roaming citizens of the universe) in fulfilling the vision of the nation. After reading this book, the reader will never waste time in random thoughts about the American ever unfolding reality. By all accounts America is an emergent and noble idea whose better days are yet to come. That is the projection whose totality can be meaningfully captured through a living compass: The American GPS!

I greatly admire the writer for his commitment to study and understand the history of the US and compile and analyze the information contained in the book. The author’s vision of the Compass toward building a more perfect union, is well supplied with historical events and citations. The author clearly shows how America is a land of freedom that affords unlimited opportunity for American dream dreamers. The overall structure of the book is great, there is a huge amount of data shows many historical facts and political controversies that make this manuscript more valuable and worth to read. – Dr. Solomon Gebru 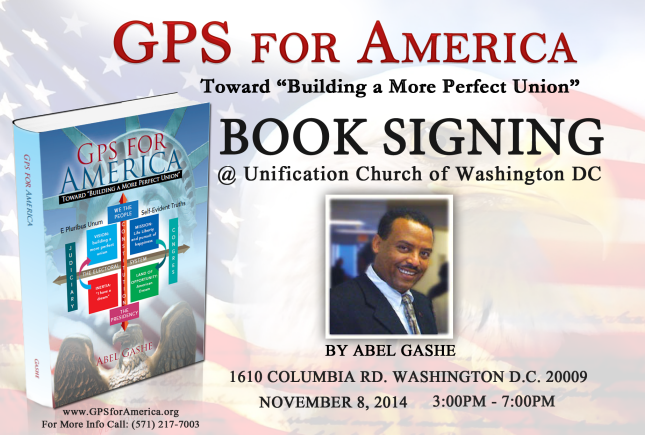